The brain, spinal cord, and nerves make up the nervous system. Together they control all the workings of the body. When something goes wrong with a part of your nervous system, you can have trouble moving, speaking, swallowing, breathing, or learning. You can also have problems with your memory, senses, or mood.

There are more than 600 neurologic diseases. Major types include:

Some of these can be treated with infusion therapy.

The signs of neurological disorders can vary significantly, depending upon the type of disorder as well as the specific area of the body that is affected. In some instances, you might experience emotional symptoms while in other cases physical symptoms may be the result. Some of the symptoms include:

Apart from a physical and physiological test, there are specialized tests that can be done diagnostically.

Apart from the issue of a cure, sometimes patients with neurological issues can be placed in rehabilitation as part of an effort to restore some lost function. This is usually a hopeful sign, as it’s rare to find a patient assigned to therapy when there’s little to no hope of at least a partial recovery. Therapies for neurological disorders may often consist of:

These may range from medications such as the neuroleptics (haloperidol and chlorpromazine) used to treat organic disorders of the brain such as schizophrenia, to comparatively simple analgesics, such as ibuprofen, acetaminophen and opiates to treat the painful effects of many neurological ailments. 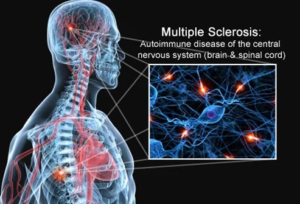 What is multiple sclerosis?

Multiple sclerosis is a potentially disabling disease of the brain and spinal cord  (The central nervous system).
Multiple sclerosis has different symptoms and they depend mainly on the amount of the nerve damage. It can affect the ability to walk independently or it can also be in remission over a period of time without any symptoms.
There's no cure for multiple sclerosis. However, treatments can help speed recovery from attacks, modify the course of the disease and manage symptoms.

Vision problems are also common, including:

Multiple sclerosis symptoms may also include:

There is no complete cure for Multiple Sclerosis. The most common treatment category is corticosteroids, such as oral prednisone (prednisone intensol, rayos) and intravenous methylprednisolone. These drugs reduce nerve inflammation.

As said , there is no cure for multiple sclerosis. Treatment focusses on progression and recovery and managing the symptoms.
Medicines used are: 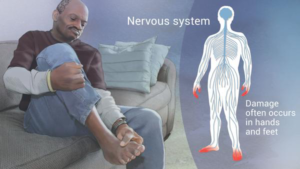 Neuropathy is a common complication of different medical conditions and it involves automatic nerves, the motor nerves and the sensory nerves.

Neuropathy affects either a single nerve or a nerve set. People with diabetes are at high risk of neuropathy. Physical trauma, repetitive injury and metabolic problems could also be possible causes for neuropathy.

There are two types of neuropathy and the symptoms vary :

Stress-relief and other complementary therapies include meditation, relaxation techniques, massage, and acupuncture.

Some people find that using a transcutaneous electrical nerve stimulation (TENS) machine helps. This device interrupts nerve messages by delivering a small electric current. Its effectiveness has not been confirmed by research. 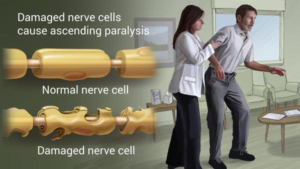 This is a rare disorder in which the body's immune system attacks the nerves. This weakens your nerves and gives a tingling sensation in the affected areas. Symptoms, causes, diagnosis and treatments are explained as follows.

This is a rare disorder and it requires immediate attention and treatment. There's no cure yet for Guillain - Barre Syndrome, but several treatments can ease symptoms and reduce the duration of illness. Most people recover from it but they also have some lingering effects like numbness, fatigue and weaknesses.

Signs and symptoms of Guillain-Barré syndrome may include:

The exact cause is unknown. But the disorder appears days or weeks after a respiratory or digestive tract infection. A recent surgery or immunization can sometimes trigger this syndrome.

What happens in this syndrome ?

The immune system which usually attacks the invading organisms begins to attack the nerves and the nerves protecting sheath gets damaged. This prevents the nerves to transmit signals to your brain and causes weaknesses, numbness and paralysis.

Signs and symptoms are close and similar to other neurological disorders and it varies from person to person.
Few diagnostic methods are:

There's no cure for Guillain-Barré syndrome. But two types of treatments can speed recovery and reduce the severity of the illness:
Plasma exchange or plasmapheresis - The liquid portion is removed and separated from the blood cells and then again put back into the body to manufacture more plasma and to make up for what was removed. This helps  in riding the plasma or certain antibodies that contribute to the immune system's attack on the peripheral nerves.
Immunoglobulin therapy - Immunoglobulin containing healthy antibodies from blood donors is given through a vein (intravenously). High doses of immunoglobulin can block the damaging antibodies that may  contribute to Guillain-Barré syndrome.
You also are likely to be given medication to:

Baltimore Infusion center provides therapies for various illnesses in a most stress free and comfortable environment. Our multidisciplinary approach to your treatment assigns qualified doctors, dietitians and other trained specialists who help in providing completely customized & personalized, compassionate care.